News From The Tonga Concert 2002 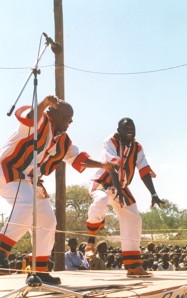 "MESSAGE IN THE DRUM AND STRING"
Monze is a town in Southern Province of Zambia, just about 200km from capital Lusaka. Further South, we meet rural town of Chisekesi. Off the main road, going East toward Gwembe town, we will find a turn off to a renowned place called Chikuni Mission (distance not exceeding 12 km).
Established in 1905 by a Jesuit priest, Fr Joseph Moreau, Chikuni Mission ended up not just to end the notions of highly tradition-rites believers, but also turned this place into a Perry-urban village. Today Chikuni Mission is more or less like a town, at least on the Zambian scale. Standing piously high beside Canisius High School, is the legendary tower that used to be the central Holy Place of worship for converters and the converted alike. It’s this foundation on which were laid the technicalities, which make Chikuni Mission a driving force to reckon with.
Apart from putting education and health standards at First Class Level, there is today a dream come true, that people otherwise had never dreamed of before. The ‘miracle’ is Radio Chikuni, which went on air in 1999 with an official radius of 70km. Its programmes are community based while its producers/broadcasters are young men and women well versed, skilled and active in broadcasting communication. Summing up its mission of “Empowering the People”. One of many ways is through a musical concert.
Though started three years ago, the 2002 concert was a symbol of a destine made in an achievable track. The previous two seems to have taught the radio team the pros and cons of what makes not just a concert, but Radio Chikuni Concert a success. More than 120 local bands registered in the Ten (10) categories that were lined-up for the stage. But only 70 were able to perform due to time factor.
The moment the first string vibrated through the Public Speaking equipment, one could not manage suppressing a joyous smile from the face. Ululations, bleating and cheers filled the air, signifying a true moment of good days in a life of someone who values culture.
The more than 4,000 spectators had a time of revisiting their culture. Bringing back to life, those past times when they would converge in similar gatherings under the bright moon and sound the drums of NKOSAADI (concert) and NKAANGAKAYE (children’s night games); the plays that used to bring harmony among the Tonga and watered their culture to fullness; chewing up all those vices that would otherwise have cracked society to death. The 2002 concert brought renowned Tonga drummers and string pullers together as brothers and sisters not adversaries. People went ‘hail’ to the jives of Kalindula (a local classical lyric), new to the Tonga string system but incorporated in its tunes.
If someone called this concert a failure, then he could have watched a different one, because the beauty of the Tonga culture was displayed to its excellence. The roots almost dying were seen being buttressed to life once more. The silent culture was made to talk in Tongues unforgettable. The unheard voices went round the country, heating the blood of culture-lovers to tears of joy.
This concert was simply a message in the drum and string. The very one to remain a symbol of unity, prosperity and integrity. Dancers were made to swing to their tune, because they realized that people’s eyes are just ‘decorations’ and do not inflict an injury on anyone. That’s what the organizers meant by “A person without knowledge of his/her past is like a tree without roots”.
Sakala Brothers were the invited guest to perform. They gave an excellent performance and showed how to entertain the public.