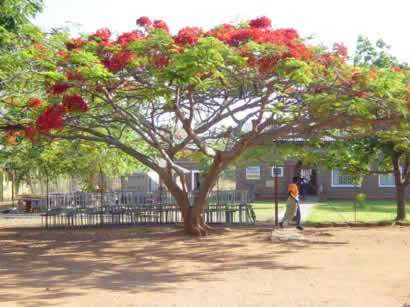 It is from Chikuni Mission that the radio station operates on 91.9 FM and covers a radius of 60 Kilometres. It broadcasts to all the 21 out-stations in Chikuni Parish and beyond, with an estimated potential audience of 250,000 (low estimate). The station also reaches four other parishes noteably Monze, Mazabuka and Choma. Chikuni centre can eaily be seen from afar thanks to the radios 69 meter guyed mast, accommodating the radio’s FM antennas.

In a ground-breaking move, with the help from Jesuit Missions and many other organisations, Chikuni Praish, has raised over £100,000 to set up and operate the first radio station run by the Batonga people for the Batonga people: a true community effort in a wider sense of the word. With the first transmission in October 1999, the majority of the programmes are in the local Chitonga language and are aired at times that are most suited to the people. They are aimed at the subsistence farmers who make up the majority of the inhabitants in the Southern province of Zambia.

The entire community is encouraged to submit programme ideas and is invited to participate in the broadcasts as much as possible. To ensure that this is possible, each of the 21 centres in Chikuni have their own “News Gatherers”. Their role is not just to gather important news but also to give detailed and constructive feed back on programmes, content and style, and to identify people in their areas that might take a more active role in the station. Filling the information vacuum, the topics covered by the programmes are agriculture, health, nutrition, HIV/AIDS, education culture, justice, family, women, youth, profiles of local talents, local issues and events. The radio has become a neutral forum where people are able to openly discuss taboos: property grabbing, sexual abuse of young girls, witch hunts and so on.

A large portion of the radios' activities are concerned with the support for the local music artists, as music is the traditional medium of passing on wisdom. Other important projects of the radio include the Radio Schools (Taonga Market), the annual Tonga Concert and Tape Production. The radio is an example of how people can find for themselves an answer to the real problems that they face in their lives. Radio is changing lives, developing minds and bringing people together in an environment based on their own needs and on their own terms. Thank you to all for making it possible!

Bank Details are given on request.