News From The Tonga Concert 2003 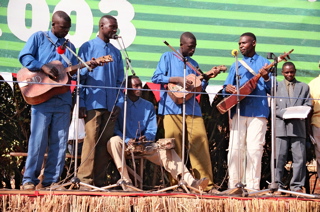 Yet again this year, Radio Chikuni hosted the Tonga Musical Concert that took place on the 29th and 30th August, 2003 at Chikuni Basic School football ground. On these two days, all roads led to Chikuni Mission for the show. This show is really a unique one, the only one in the whole of Zambia, which promote Tonga culture and traditional values through music. The festival attracted 95 local bands from Southern Province of Zambia (there were many more but not time to permorm).
The theme for this year was “Mambuulanwa Munyimbo”, whose English translation is “Sharing Through Music”. Music among the Ba Tonga is highly recognised as not only a mode for personal expression but also a means of communication between members of the community. Such communication promotes unity, cultivates wisdom and inculcates knowledge. This in the long run keeps the Tonga community alive.
This year, like the previous years the concert was spiced with a Tonga Woman Beauty Pageant that echoed the traditional outfit of a Tonga woman. The pageant was organised by Mukanzubo Cultural Research Institute, a local institute restoring the Ba Tonga heritage through music recordings, producing cultural programmes and publishing Chitonga books. The focus in the pageant was on how the Tonga culture has change, “Butonga Bwasanduka”.The musical competition was divided into 10 Tonga music categories. Primary categories were: Kalumbu, Kalyaba, Kuyabila, Seesa and Kalindula. While some others included Chigome, Chikaambekaambe, Ma Guitar and Bukonkoolo. Almost all the songs sung were very much in line with this year’s theme, ‘Sharing Through Music’, at the same time focusing on some issues affecting our community in one way or another. Issues, which were very much highlighted, were those of HIV/AIDS, poverty, unity, development and respect for women and children. The concert besides being entertaining, was equally educative too..
Present at the Concert was Bishop Emilio Patriciarca of Monze. The Bishop thanked Radio Chikuni and Mukanzubo Cultural Research Institute for organizing the Concert and the Tonga Woman Beauty Pageant respectively. The Bishop mentioned in his speech, that music is a gift from God and plays an important role in our lives. Singing and dancing are done at various occasions in our lives to make it meaningful. You will find both when people are in sorrow and when they are marrying making. Bishop Emilio Patriciarca advised the audience to be critical listeners, to listen with the heart if music has to make sense in their lives.
The guest of honour, the Deputy Minister of Information and Broadcasting, Honourable George Chilumanda in his speech, commended both Radio Chikuni and Mukanzubo Cultural Research Institute for what they are doing. They are not only entertaining but also informing the spectators. Because a message can be channelled through music, it is good that very important issues such as the deadly AIDS disease and some matters on development in agriculture are being taken up be the musicians. The Minister expressed happiness over the idea of community radio stations, which are giving the Zambian musicians a guaranteed livelihood. He appealed to all business houses to continue sponsoring the local artists in their tours, which will help to revolutionize the Zambian music like it is in other countries. The Minister reiterated the Government’s fight against piracy and encouraged all stakeholders in music to pay royalties to Zamcops. By so doing they will be supporting the local artists and Zambian music; consequently, our local musicians can benefit from their hard work. He also urged other radio stations to emulate Radio Chikuni in promoting traditional music. To the local artists he said they have to be very creative and produce quality music and have to learn to use modern equipment along side the tradition ones. They should not fall prey to just copying other cultures in the name of globalization.
The concert was graced by artists who made to the top of Zambian music. Maureen Lilanda and two of her musicians gave lovely performance, mixing very well their own and the Tonga traditional tune. It was encouraging to see them come to a small village. At the same time, it gave an extra boost to the upcoming artists. Thank you!