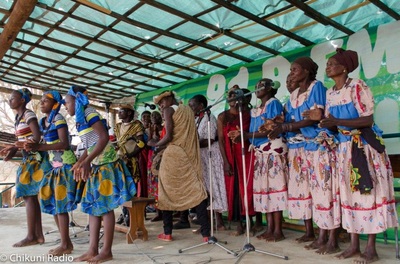 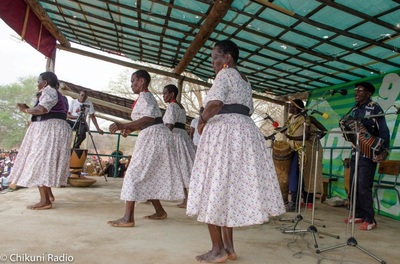 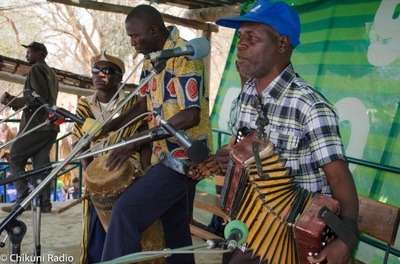 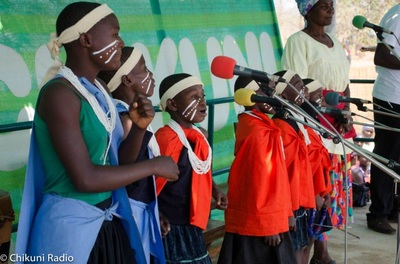 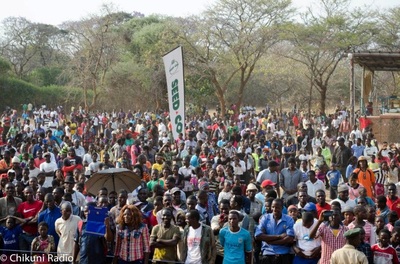 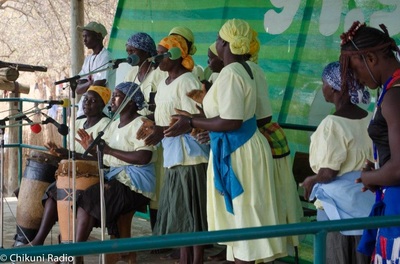 Though bands have competed in various categories of the Tonga music at the Chikuni Music festival over the years to win prizes, this year’s event was different in that it was not a competition, but a mere showcase of the exceptionally beautiful culture. To this effect, unlike the previous years, there were no Judges, no winners or losers but a token of appreciation was given to all performing bands for giving their time to celebrate, promote and preserve the local culture. Even though the music festival was held for only a day, at least 9,000 people turned up to enjoy a beautiful showcase of traditional music. Prominence was given this year to the dying traditional music and dances. The Local cultural institute, Mukanzubo Kalinda’s cultural guru Yvonne Ndaba spent six months researching on the traditional dances from various chiefdoms. She identified groups from Chief Ufwenuka, Senior Chief Moonze, Chief Munyumbwe, Chieftainess Choongo, Chief Chona, Chief Moyo, Chief Nalubamba, Chief Hamaundu and Chief Mwanza. These groups passed on the wisdom of the Tonga through their various performances. All costumes for these groups were made by Mukanzubo Kalinda cultural institute.
The music festival is aimed at preserving, celebrating and developing the local culture through music. The first concert was held in 2000. It has grown over the years and attracts around 10,000 people and is one of the biggest traditional music festivals and the only of its kind in Southern Province. 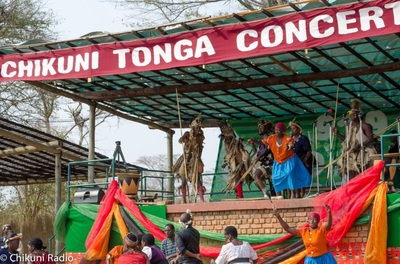 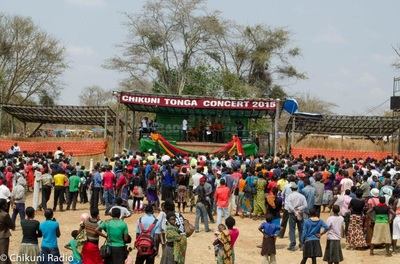 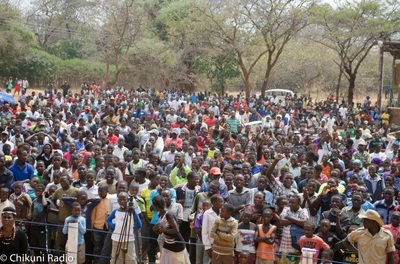 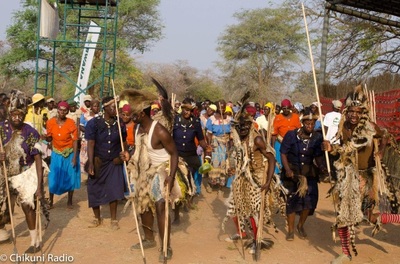 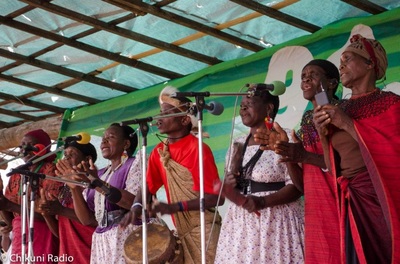 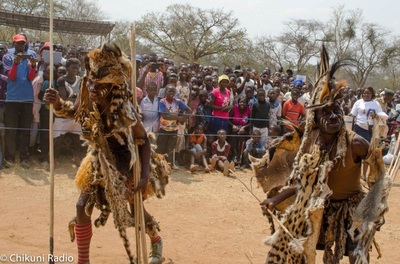 ​SPECIAL FEAT 2015 - TRIBUTE TO BERNARD. C. MWEETWA
​Late radio drama Actor Bernard C. Mweetwa was honored posthumously for his immense contribution to the Concert where he was the most preferred MC. Popularly known as Hamaleke after his comical character in the radio drama on Chikuni Radio; Bana Monze Cultural Ensemble paid tribute and eulogized the late actor in a special Tonga dirge. 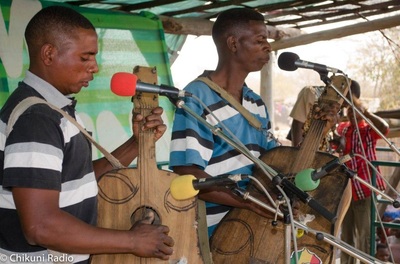 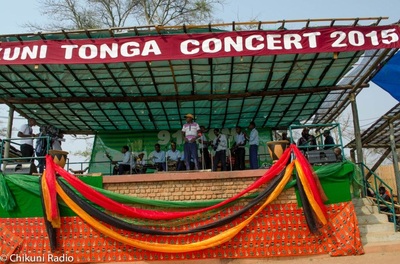 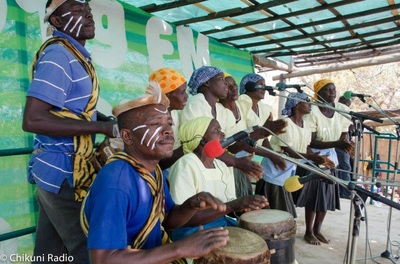 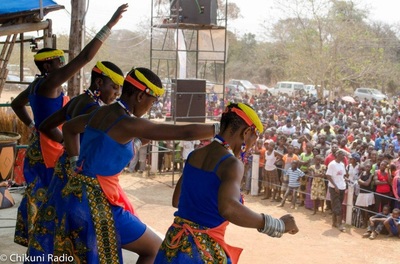 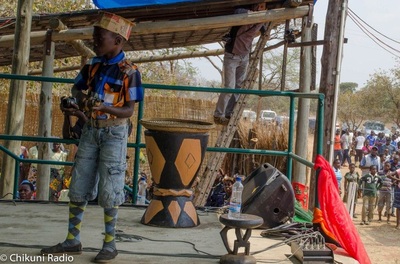 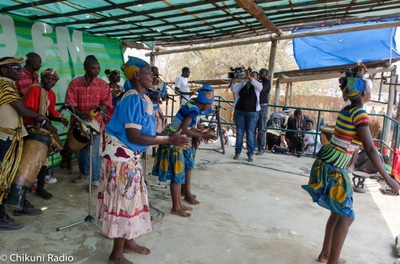 CONCERT GIVES PLATFORM TO SURVIVOR OF 1979 GUERILLA ATTACK TO TELL HER STORY
56 year old Bernadette Moonga who lives in Chief Munyumbwe’s area in Gwembe was such a marvel to watch during the 15th annual music Concert.
Together with her grandchildren, she took the Concert revelers back in time to tell her story of survival.
On 8th of November, 1979, Bernadette and her 32 year old husband were on a van, travelling from Munyumbwe to Gwembe hospital to see her grandmother who was in hospital at the time.
She was with 21 other passengers on the van when they were attacked by guerrillas from Zimbabwe. As the driver was navigating through sharp corners on the rocky road, bullets rained on the moving vehicle from all directions, forcing it to a sudden stop. Gun trotting and trigger happy Guerrillas from Zimbabwe, appeared out of nowhere and started shooting at the people in the van. 21 people died on the spot. Bernadette  was shot at several times but not a single bullet went through her body, amidst the chaos, the blood, the shrieking voices she says she held on to her 7months old baby, as a soldier pointed the gun at her. She stared at the gun muzzle for a time and does not remember exactly what happened. All she remembers is struggling to free herself from rocks that had fallen one her and seeing a van a few meters away surrounded by bloodied, bullet riddled bodies. When the guerillas left, satisfied that they had killed everyone, and there was no witness, Bernadette said she found herself holding the body of a faceless baby, his face was ripped off by the bullet and she at first felt that was not her baby. Bernadette says only the clothes made her accept that the faceless body she was holding in her arms was that of her baby. 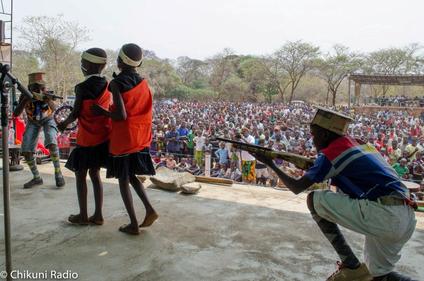 She says she went back to the van. She pulled her husband’s lifeless body and she realized that her baby and spouse were gone. At this point, it then dawned on her that she was the only one who survived the guerrilla attack. Surrounded by blood, bullets and dead bodies, Bernadette lost consciousness. She does not remember what happened next. The next moment she woke up, she was in hospital and the next thing, she was taken to a secret location, hidden for a week and placed under guard.
Bernadette was only 20 years old when she lost her 7months old baby and her husband. She says after the government hid her for a week, she was driven back to her village and had to come to terms with her loss.
She says she had to come to terms with the fact that she had lost two people she loved the most during the massacre and had to be strong for her only son, the two year old boy who was left home on the fateful Sunday morning when she and other people on a van were attacked by guerrillas. As part of funeral rites, Bernadette had to be sexually cleansed by a male relative of her deceased husband. During the sexual cleansing, she fell pregnant and nine months later gave birth to a son born out of a traditional rite.
When her son was two years old, Bernadette was given permission to remarry by her late husband’s family.She has 8 children from her second marriage and says she is happy though she is still haunted by the incident which happened over 3 decades ago.
When she heard that Yvonne Ndaba from the Mukanzubo Cultural Institute would be visiting Munyumbwe to identify groups to perform at the Chikuni Music Festival, Bernadette organized a band made up of her grandchildren, her 11 year old daughter and began planning how to use the power of music to tell the story of how she survived the guerrilla attack 36 years ago.
It was the first time Bernadette was telling her story to the public. During the highly emotional performance she put up with the help of 8 girls and 2 boys, the audience was moved to tears. Her performance was perfect, convincing and moving. The children sang in a melodious voice an elegy highlighting how the attack happened, deploring  how Ian Smith’s guerrillas cut short the lives of 21 people and brought their dreams and aspirations for their home country to an abrupt end. As Bernadette and girls sung, two boys who were holding replica guns moved menacingly on stage as if searching for prey to shoot, as two girls, moved in an imaginary van, the other girl holding a steering wheel driving an imaginary vehicle. The song ended with the two boys shooting two girls, who fell to the ground, writhing in agonizing pain in a mock send off to other side, in a perfect representation of the last moments of the 21 victims, writhing and groaning in pain until they took their last breath. The revelers gave a thunderous ovation, to the emotionally charged performance. The applause was nothing short of an encore.
Bernadette says she has told the story to her family so many times but came to the concert to share her horrific tale with the young generation never to forget the price Zambia paid during the liberation struggle of present day Zimbabwe.
Did reliving the past bring back any traumatic memories­­?
Bernadette says she has dealt with whatever happened but says her life changed forever. She is however grateful for the support she has received over the years from her second husband Paul Namusanje. She says she enjoys her quite life as the wife of a farmer.
WHAT ABOUT ARTISTS?
Whether there are tales of suffering, warrior dances, music celebrating a girl who has come of age, or a guitarist deploring the waning away of traditions, the annual music festival remains an important part in the renaissance of the local culture.

Chikuni Community Radio station believes in the great renaissance of Tonga culture through music and dance because so much knowledge and wisdom can be passed on to the younger generation for the preservation of the revered customs and way of life of the people, while  accepting the fact that culture is dynamic and ever changing.
We are proud to see our local artists be recognized and their music being appreciated beyond Southern Province. Two artists, who rose to fame during the Chikuni Concert, were nominated for the prestigious Zambia Music Awards. Rodrick Mungala walked away with the best traditional/indigenous instrumentalist award in 2015, as Radio Chikuni celebrated its award as best community media awarded by UNESCO.
Another artist, Enock Mbongwe performed at the BBC promos at the Royal Albert Hall in London. He was given a standing ovation.
The Concert has offered a platform to artists who had no means to record their music or promote it.

WHY THE CONCERT?
For the Tonga’s music is a way of life. There is music for every occasion. When you listen to Tonga music, you take a journey through the lives of the people from the norms, taboos and every aspect of their lives. The greatest tragedy for Tonga culture is the fact that there is no proper custodian for it. Music is often an important component of religion, ritual, celebration, work, play and politics. It can also help to create and reinforce boundaries of community and identity, and serves as a means to social expression that gives rise to emotions, to memories, and to pleasures. This concert explores the power of music to transform our lives.
The Concerts costs thousands of thousands to host annually and Radio Chikuni would like to invite the corporate world to partner with us to preserve the local culture through song and dance. We currently need thousands of kwacha to put structures at the concert arena to improve the reveler’s experience. Our artists need training to hone their skills and improve their art so that they can be invited to perform at other events and their music careers must not start and end with the Concert. In the age of piracy, releasing an album no longer puts money in the pockets of our local bands but performances can.
Why then should the corporate world be part of the annual Chikuni traditional Music Festival?