News From The Tonga Concert 2004 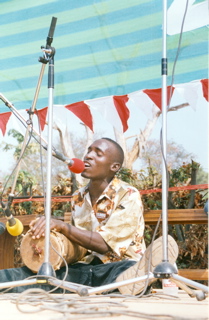 Right from the time it was established in March 2000, Radio Chikuni has annually organised a Tonga Music Concert. The festival is the only one of its kind in Zambia. This year, 2004, the concert took place from the 27th to the 28th of August. The theme for this year was "Abaliibe Bantu bokwesu” whose English translation is simply "Let our people be". Music among the Ba Tonga is highly recognised as not only a mode for personal expression but also a means of communication between members of the community. Such communication promotes unity, cultivates wisdom and inculcates knowledge. This, in the long run, has kept the Tonga community alive.

“Nkosaadi 2004” had a mixture of various music and great entertainment to the onlookers. 105 groups competed in the two-day music extravaganza with great fun to the more than 8000 avid spectators.The youngsters are taking over from the old timers. The young artistes are continuing giving the old timers a very stiff competition. This was evidently seen in the Kuyabila category where the 2002 winner, Joseph Chileka, was clearly beaten by 15-year old Roderick Mungala for the second time running. It is very rare for a boy of that age to perform in the Kuyabila category.X-bass, formerly known as Chigome X-Bass, despite having lost their leader took the crowd to a much entertaining performance seeing them go off with the first prize in the popular Kalindula category. In other categories the story was different. The popular Gonde Culture received a shock when Azara Culture group from Chief Mwanza’s area in Monze District narrowly beat them.The popular Mashombe Blue Jeans Band did not come for festival maybe because people accept them as champions. There were calls from the people that MBJ should not come to compete as the group is simply good. This opened room for those that are still young, but the competition was not in any way simple.Old men more conservative than the new generation were seen playing more traditional music in the Kalumbu and Kankobela categories. Participation was open to all Tongas who could fit in the ten categories. As an entertainment strategy, the prominent bands were reserved for the second day.
This year Ballard Zulu was the guest musician and he performed his popular song Activities being backed by Green Mamba’s Collen Mukonka.No age group or social sector was left out in the two-day event. Having seen the importance and impact the music festival has had on the community, the station raised funds to get better speaker system. I am proud to say that this year we gave the spectators the music they so much long for. The concert is getting bigger and better. Next year we have plans to construct a special stage for the event. There is now a need for a permanent structure designed specifically for such big events.

The concert has been running successfully for the last five years. Among the local people, i.e. the people of southern province, the show is getting very popular. One shocking thing is that the business community and the well-wishers are sponsoring less and less by the year. This has made Radio Chikuni dig deeper in its coffers.

This year the music festival was again co-hosted with a traditional Tonga Woman beauty pageant that reflects on the traditional dressing of a Tonga woman. The pageant is organised by Mukanzubo Cultural Research Institute, a local institution restoring the Ba Tonga heritage through music recording, producing cultural programmes and publishing Chi Tonga book.

WHY THE MUSIC FESTIVAL?

" There is no growth without roots"; is one African adage used in describing the restoration of culture among the tribes of Africa. In today's changing and intermixing world, the African culture has found itself at the crossroad with Western Culture. In watering the 'roots' of their cultures, the surest way Africans have been doing so is through music.

In Africa music is considered to be a store file for traditions. This simply means that cultural practices and traditions can be stored and kept in music. In realizing the importance of culture and tradition among the Ba Tonga people of Southern Zambia, Chikuni Community Radio Station, based in the same region, broadcasting on 91.8fm, has been organising an annual Tonga traditional music festival for four years now.

The Station started official broadcasting in March 2000, and in September the same year the first Tonga music festival was organised. The festival is the only one of its kind in the country. It has gained a lot of popularity not only among the people of the Southern Province, but also of the whole country as well. Every year the concert is held around August and September.

One reason for starting the concert was the greatest tragedy that was befalling the Tonga culture. There is no proper custodian for it where all the young could look up to. The bare facts are that, if a culture has to remain the driving force of any kind of society, something has to be done to safeguard against its erosion by foreign cultures or just simple loss of memory.

Radio Chikuni offers a wide range of cultural, religious, educational, entertainment, health and sports programmes. But it only does this verbally.
The Music Concert has become a rare opportunity to pass on the Tonga heritage verbally and visually to thousands of onlookers. Spectators get a chance to see the traditional instruments that are used in the singing.

The concert attracts thousands of people and about a hundred musicians from areas surrounding Chikuni Mission, which has a radius of about 50km. The greatest thing about the concert is that no one pays to either watch or participate; yet winners go away with cash prizes.

The promotion of upcoming Tonga artistes and other cultural activities, which may develop Tonga music and culture, requires concerted effort by all those who care for not only the Tonga people but also the holistic development of Zambia and its many ethnic groups.

Radio Chikuni wants the festival to move a step further each year. Help the station entertain the community and also enlightening them on the rich cultural heritage of the Tonga people. We shall stretch the limits to set the trends. Indeed we shall always empower the people.